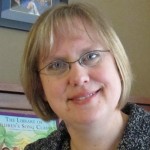 Esther and I have become BlogFrog buddies, and I am delighted to be guest posting for her today!

Emmy was crying as if her little four-year-old heart was broken.

She ran to the window, waving at her Daddy and sister as they drove away early that morning. They were going skiing up in Wisconsin. Since I am not much of a skier and tickets are expensive, we had decided that Emmy would stay home with me while seven year old Lily went to her first ski lesson with Daddy. I had a special day planned for Emmy and me, but for those few minutes, all my plans didn’t matter. She wanted to be with Daddy and her big sister. I gathered her up in my arms and dried her tears.

Later that morning, I took Emmy to a preschool art center, and we made a special bubble paint painting. Huge machines with funny looking tubes spit out colored soap bubbles, leaving round pink, blue and green circles on Emmy’s paper. The bubble machines looked like something out of Willy Wonka’s candy factory!

After the bubble painting was completed, we sat together at a long table covered with art supplies. Emmy spent a loooong time painting a paper towel roll with silver glitter paint. I wondered…couldn’t we have done this at home? But Emmy was really enjoying our time together.

Since she loves pasta, we had a special Mommy/Emmy lunch together at Noodles & Co. After spending much of our morning at a place filled with preschoolers, I was ready to go home. But Emmy was not done yet; she wanted to go to the children’s museum just down the street. Since we’re museum members, I figured it would be okay to stop by for a hour or so. As if Emmy hadn’t gotten enough of artwork, we spent almost the whole visit in the art adventure room! And we couldn’t leave without Emmy painting her face; her most favorite museum activity EVER. 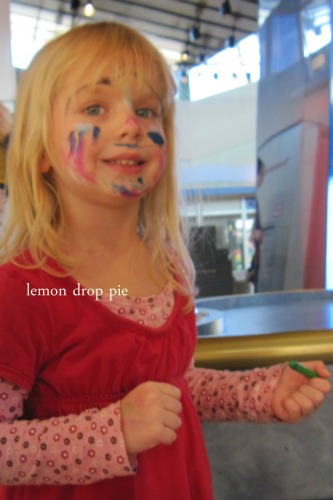 As we strolled back to the car, finally ready to go home, Emmy held my hand and skipped along beside me. “This was the best day ever, Mommy!” she exclaimed, smiling up at me. I was smiling, too.

Ginny Marie admits that when she is in tears, her two daughters help bring back the smiles. She blogs at Lemon Drop Pie about motherhood after breast cancer.