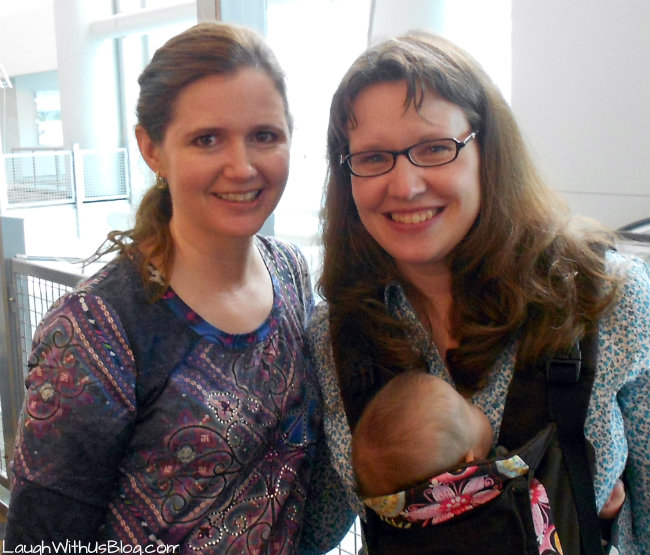 I really enjoyed the Teach Them Diligently convention.  The speakers were great, the curriculum booths were fun, the kids program was very well run, meeting new people was exciting, but the highlight of the convention for me was getting to see Katy.  The convention is a great way to bring people together!  I hadn’t seen Katy since college!  Katy is one of my favorite people.  I have just always remembered her this way.  Katy was always lots of fun, but she was also someone I could talk to about things that matter.  I treasure every minute I got to spend with her and her beautiful family!

Katy was there with her husband and six children, and of course I was there with our crew of seven.  Getting to really visit was challenging, but we made it work!  We ate together for lunch one day.  At first we had the crazy idea of walking to a nearby restaurant, but half the people at the conference must have had the same idea, and I didn’t think about the difficulty of seating 15 people together until I saw the line.  We ended up all walking back to the convention and eating at the snack bar that probably took as long waiting in line as it would have to wait to be seated at that restaurant, but that was okay.  We let our husbands wait in line and took all the children to sit by the wall.

The wall turned out to be curtain dividers hung around a metal frame of posts.  This curtain divided the room from the curriculum booths.  I saw my kids enjoying going under the curtains and back and instructed them not to.  Horrors what if the thing fell!  We all sat down in sort of a circle and then our men gallantly brought some nourishment.  As we were finishing our food and enjoying visiting, I failed to see that one on my girls had begun to play in the curtain again…until it was too late.  I heard a panicked, “Mama!” from behind me.  I turned to see my daughter holding up one of the posts with all her might as the whole wall leaned toward her.  In that instant she reminded me of photos in children’s Bible stories of Samson tearing down the pillars only in this case my daughter was trying to hold them up.

“Jason!” I shouted, but he was in conversation, and I knew he’d never get there in time.  I put down everything I was holding and rushed to her.  It felt like slow motion, like running in my sleep!  When I was about half way to her, someone had come from behind the curtain and caught it just in time.  We were saved!!  I had already seen headlines of “LaughWithUsBlog destroys wall at conference.”