For the last three years we have participated in Free Museum Day, the day when museums all around the country open their doors for free.  Well, many only offer two free tickets per household which in our case doesn’t help a whole lot.  Fort Worth does a Day in the District that coincides with Free Museum Day, and the participating museums are completely free on this day.

This year we chose the Fort Worth Museum of Science and History.  Well, that morning we dragged our feet getting ready.  As everyone was heading out the door, my husband remembered that there was an In-N-Out restaurant somewhere in the vicinity and sent me to look it up.  I ran back to my computer and did a speedy Google map search, located the place, wrote down the address, and ran out to catch up with the rest of my family.

The museum was understandably crowded.  We stayed in the hands-on kid areas and took turns swapping which kids we followed around.  Our kids were having a blast, but at the same time they were being very cranky toward each other.  The pregnant me was just not willing to do endless battle at free over-crowded museums, so much to their chagrin, we decided to leave much earlier than we had planned.  Maybe they’ll remember this next time. 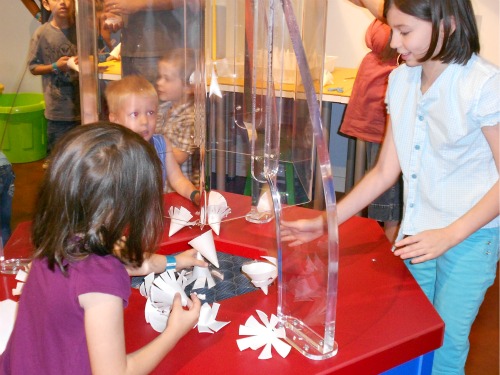 Off we went to find the In-N-Out hamburger place.  I yanked out my handy dandy directions and led us right to it.  Yessiree–the In-and-Out auto repair shop.  Oops!  The little cliché “Haste makes waste” came to mind!  And as is generally the case, I found it hysterically funny, but my husband not so much!  “We’re going home,” he announced, and was met by groans all around.  I quickly pulled out my phone and looked up the right address just in case he changed his mind, and somehow he drove right to it.  I always wonder at how easily he can find places.

So we took our grumpy kids to our new and exciting hamburger joint that was bursting with people.  While my husband ordered, I stood with the kids close, but not too close, to a table of people that were almost through eating.  A bit later I noticed a man came to stand on the opposite side.  I wondered which table he was hoping to get.  As “my” people got up from the table, the man rushed over and placed his stuff on “my” table.  I am not normally the most assertive person in the world, but on this occasion, if the man was going to steal my table, I at least wanted him to feel guilty about it.  I waited for the people to get out of their chairs first, but then went to the man and said, “I’ve been waiting for this table.”  He was none too happy, but I suppose we looked so pitiful that he humphed and left.  We crammed our family of six, well seven actually, into a table for four and gulped down hamburgers, fries, and shakes…that tasted much better on our romantic little date than they did on this day surrounded by our grumpy crew and wall to wall people.  Whew.  So that was our frugal though exhausting little family outing on Free Museum Day.