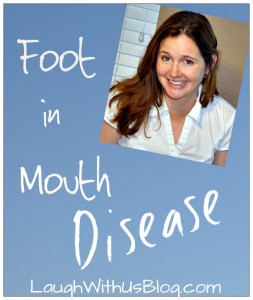 It’s a disease, and I have it.  It’s called Foot in Mouth Disease.  Ay ay ay ay!  How I wish the floor would open up and (temporarily) swallow me up sometimes.  I try not to say too much in front of people I don’t know well, because I know if I do I’ll say something really wrong.

This happened a couple of months ago.  I was so embarrassed that it’s taken me this long to confess to it.  I was visiting with some extended family members that I don’t see often and really don’t know very well.  They are really sweet people, and I was completely comfortable around them obviously or I wouldn’t have run my mouth so much.

As we were visiting, we talked about our mutual love of the show Duck Dynasty, but in the background and in my line of vision 19 Kids and Counting was playing on the TV.  I lived in Louisiana for a couple of years when I was a kid (and have great memories) so I figure I have the right to joke about Louisiana.   So as we were talking, I kept making Louisiana jokes.  My family laughed good naturedly, but I got the feeling that something was a little…off.  After my last joke one of them said, “Uh that’s in Louisiana isn’t it?”

“Yes!” I replied.  And then it hit me.  The whole time I was talking about Louisiana, but saying Arkansas!   My family who I was talking to…is from Arkansas!   So embarrassing!  I think I must have done that because the Duggars from 19 Kids and Counting are from Arkansas and their show was playing.  I don’t know, but there is absolutely no hope for me.  Thankfully, I am usually surrounded by kind friends and family who don’t hold things against me.