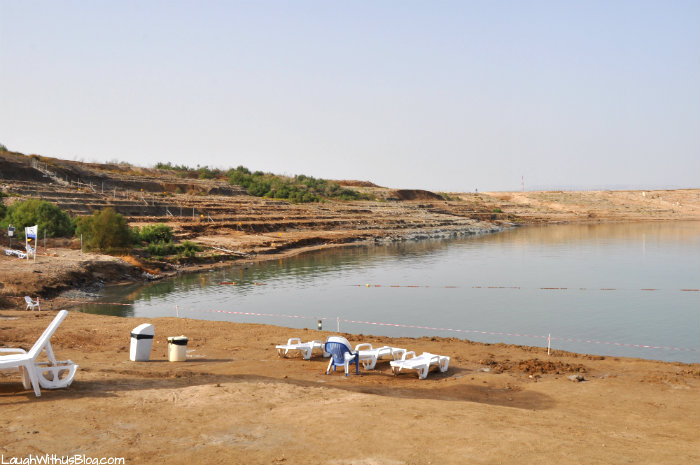 Our bus pulled into a public park area. There was a fee to enter. Just past the entrance were the changing rooms.  I was still feeling a little jittery about taking off by myself from the panic attack earlier that day, but I headed to the dressing room alone.  I entered the room, and that’s what it was, a big empty room.  Women were stripping in front of me! This was not normal for me.  There was absolutely positively no way I was changing out in the open.  I spotted a bathroom stall open and ran for it.  I may or may not have held up the bathroom line while changing in the stall, but I hurried as much as I could.

I really dislike wearing a swim suit in front of people I know.  Strangers I don’t care, but not people I know.  I’m not sure why exactly.  If this hadn’t been a one of a kind experience, I wouldn’t have done it, but alas there I went. 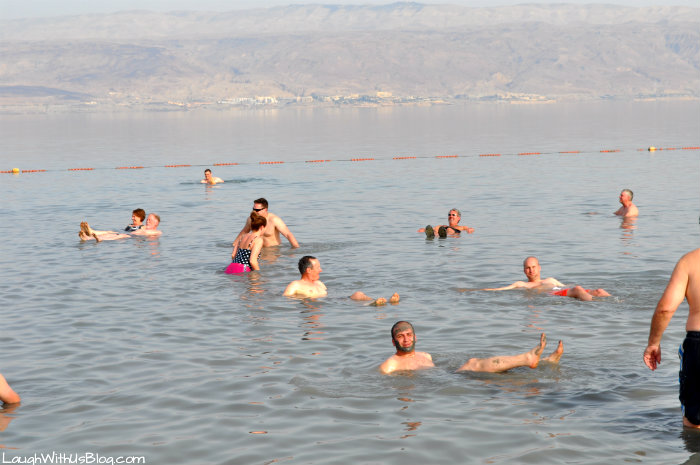 Floating in the Dead Sea is all about the experience versus a sight to see.  We were rushed through this. Our tour had an hour slotted for the entire experience from the time we got there till time to be back on the bus. I wish we had had more time to just relax and enjoy it. Was it really worth it?  Yes! It was SO cool! 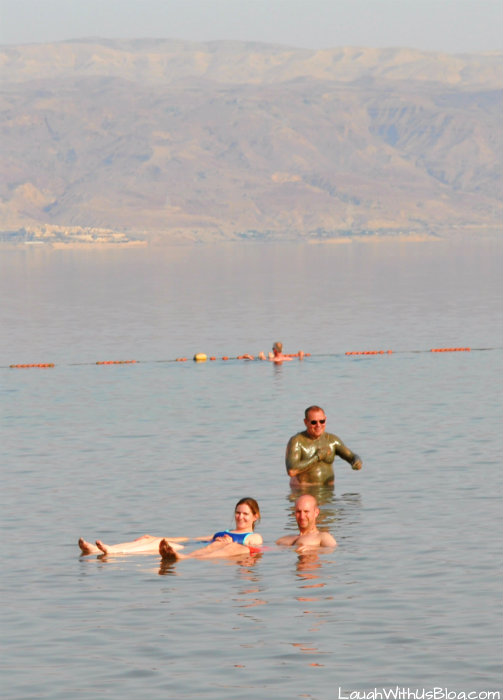 I mean you know you’re going to float.  You’re told you’ll float, but to experience that feeling of being in the water and absolutely not being able to go under is just amazing. It’s not something you fully understand until you’ve done it. Swimming in the Dead Sea was actually very difficult to do. We had to be very careful to stay on our back, when I accidentally turned on my stomach, my whole body still floated and my head was being forced down face first!

Walking into the Dead Sea is very squishy.  Your feet sink in the mud and you feel like you’re going to fall.  Walking out in it is next to impossible.  I found that the best thing to do was just sit down and float possible even though the water is shallow.

The mud is supposed to be very good for your skin.  People all over were covering themselves with it like our photo bomber back there.

Well since there wasn’t much time we dipped in, floated a few minutes and then went back to face the changing rooms again.  Jason liked it so much he stayed till the very end and walked back onto the bus last.

I didn’t know how much I would like floating in the Dead Sea. It’s a one of a kind experience. If you ever have the opportunity, don’t opt out, even if it means getting out of your comfort zone. You have to float in the Dead Sea!

More from our trip to Israel: Kibbutz Haon Guest House on the Sea of Galilee, the traditional site on the Jordan River where Jesus was baptized, and Masada.