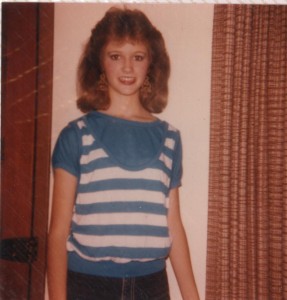 This picture was taken my 8th grade year. I believe I was dressed up for one of two times I ever went trick-or-treating, but I thought it went well with the story anyway!

It was my first day of  junior high at the BIG school.  I was now grown up and sophisticated.  I got up incredibly early and plastered my face with way too much makeup.  I was dressed in my finest.  It was going to be grand.

I got to school early and was milling around the school yard trying to act grown up when along came a little scraggly mutt.  It ignored the whole junior high student body to come and bark at me.  All pretense of sophistication flew up in the dirt from my shoes as I took off running.  On and on I ran in fear with the little dog barking at my heels.  I ran around the whole enormous building while the entire school stopped what they were doing and stared.  But the dog kept barking, and I kept running.

The only thing that changed my second time around the building was that instead of the kids just stopping and staring, they were pointing and holding their sides in laughter, some actually falling to the ground.

Finally my hero appeared.  Taking pity on me, though not enough to quit laughing, he took three steps toward the dog, stomped his foot and yelled something loud.  My vicious attacker immediately fled with its tail between its legs.

Throughout that whole year different people would point as I walked by and say, “Hey, that is the chick that was running from that little dog,” and they would break out in uproarious laughter!

I think maybe this event scarred me for life!