Our Family Vacation to Houston Part 7

Start at the beginning

We finally left the Science Museum in time to grab a late lunch.  We wanted something cheap and fast, so we decided to eat at a Sam’s Club that we had seen near the hotel.  Well, it was about as clean as the hotel.  Whereas the Sam’s we frequent has a huge eating area that is well maintained, this one only had about five tables that were all full, and there was a huge line of people waiting to order their food.  I told Jason what I wanted and that I would grab a table when one was free.  Faith stayed in line to help him, and I stood in the corner with my three youngest, our eyes begging for a table.  We were finally able to get one right before Jason and Faith got to the front of the line to order our food.  Next came the multiple trips for forks, napkins, extra plates, and drinks.

One of the girls sat down with a huge slice of pizza that needed to be halved.  I told her to wait until her dad came back with the knife and fork, but she must have been extremely hungry because she took matters into her own hands and tried to split the slice on her own. She pulled and pushed with more force that she realized. It finally came apart all right, one piece safely in her plate, but the other took wings and flew under the table, face down!  She looked up in horror, knowing she had disobeyed.  Her father was uncharacteristically perturbed over the whole thing. It was his slice of pizza, after all.  We finally cleaned up the mess only to have her spill her water all over the table.  We couldn’t get out of there fast enough.  But we had eaten and it was cheap!

I can’t say that anyone’s spirits were lifted after that meal, but you should have seen their eyes when we walked into Houston’s Children’s Museum!  It was love at first sight.  The place was so crowded that my husband and I looked at each other and actually considered leaving.  We were so glad we didn’t, however. This was the kids’ favorite place that we visited on our whole vacation. Truly, we’ve been to several children’s museums, but none came close to the extent of this one.  The kids didn’t mind the crowd one bit and completely forgot their fatigue.  We were a little worried about losing them, but after we got over our claustrophobia, we thoroughly enjoyed watching them play and explore.  In fact, we stayed until they closed.  The kids walked out begging us to take them back.  Only Little Jason had trouble toward the end.  He had thoroughly enjoyed himself, but it was six o’clock, and he hadn’t so much as nodded off the entire day. 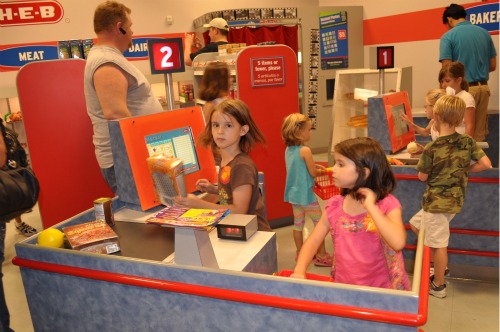 This area alone kept them busy for hours! 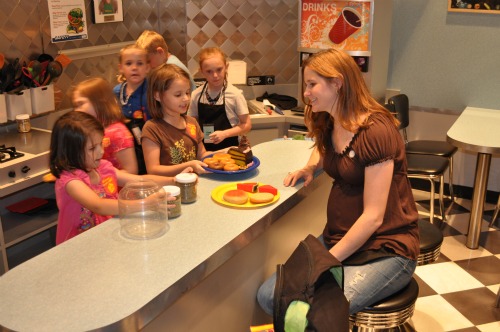 It was nice to be served for a change. 🙂 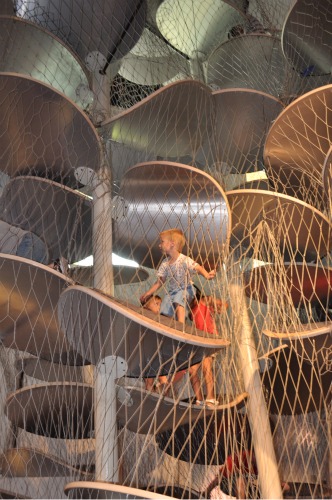