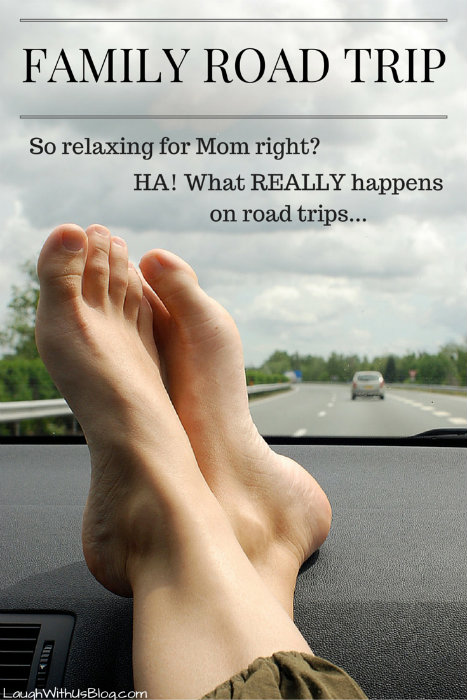 A road trip just isn’t right without some stories to tell right?

Our road trip began about mid day so that my husband could get another day of work in. You know by now it’s not an Irish family trip unless someone throws up right? One of the kids gave me just enough warning to grab glass I had in front of me and fling it toward the back of the van spraying the remainder of the water all over the children in its path. I felt like super mom getting it there in time. I mean there was nary a second to spare! The other kids were screaming, and I was chuckling to myself–so proud. Ha!

There was my laugh and drama for the day. I was done.

It was late at night on the last leg of our journey, and we were running low on gas. I mentioned it a couple of time, but didn’t want to be the nagging wife. We were all exhausted.

Now we have this really amazing Ford Transit van that tells you how many miles you have left on the gas tank. I absolutely love that feature!  So I asked my husband how many miles were left and there weren’t that many. He kept driving.  We were getting close to my parents house, but I was getting more and more nervous. “I really think you should stop at the next gas station,” I finally blurted. He was not worried at all. His standard answer is, “There’s always gas left in the tank when it hits empty. I’ve driven 20 miles on empty before.”

I’d had enough. I was so worried by now.

Folding my arms I said, “If you run me out of gas out here, I’m going to hate you forever.” I don’t go around talking about hating my husband. Ha ha. My four year old has taken to using the words love and hate regularly to express his pleasure and displeasure and being the awesome mom that I am, I’ve learned from him. 😉 My husband knows I love him!

Seconds later the van began to slow down noticeably. “We’re out of gas,” said my husband.

“Very funny!” I replied, though I didn’t think his joke was funny at all.

You won’t believe it!

He only wished it was a joke. We actually ran out of gas on the highway! Ha ha! He was able to let it roll to the next exit and get mostly off the road before we lost all momentum.

There we were stranded across the highway from the state prison and an area known not to be the safest of places.  And of course I found it quite hilarious. Guess I’d have to hate him forever. Ha ha ha. Wasn’t it just too perfect that I had just said that? My husband, however, was not laughing! 😉 He was just so mad at himself, bless his heart.

We were only ten miles from my family’s home and my brother-in-law drove out to us with a container of gas. Saved! I’m so thankful. The closest gas station was two miles away, and I just hate to think of what might have happened with my husband walking along alone on that road late at night and me stranded in the van with five kids.

I wonder who would have survived…

We got back a few days ago from visiting family in South Texas. My dad had back surgery, and I was able to stay in the hospital with him. He was scheduled to be in the hospital three days, but he was finally released six days later. He is happy to be home, though he has a long road ahead to recovery.