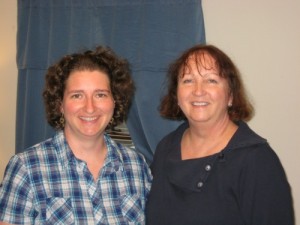 Tori Banks from The Home Front is back today and sharing some more humor with us.

My mom and I seem to have to worst luck with vehicles.  One day, she pulled up to the drive-thru window at the bank.  As she came to a stop, she reached down to move her seat forward.

But when the car halted, the seat slid forward too far and she was jammed up against the steering wheel.  She reached for the lever to move the seat back, but it was out of reach.  She was stuck!

I imagine the bank teller gave her a pretty strange look as they conducted their business!

Another time, she decided to wash her car, which had deep bucket seats.  She pulled up to the machine and lowered her window to choose the cycle she wanted.  When the light turned green, she pulled forward to position the car, and the nozzles began to spray.

The only problem was she couldn’t get the window rolled back up all the way!  And she couldn’t leave because the sprayers were already circling the car.  Water began to spray in through the window gap, and she hopped up onto the center console to stay dry.

A puddle of water gathered in the driver’s seat with every pass of the jets.  When the wash was over, she gathered her nerve and plopped into the soapy fluid to drive home.

I wonder what Grandpa had to say about that!  I bet he probably wasn’t as angry as my mom was, when I damaged my grandparents’ car.

I loved to ride and play in my grandparents’ old Oldsmobile when I was young.  It seemed so huge to a little girl!  There was an emergency light meant to plug into the cigarette lighter.  It was small enough to fit in the glove box, with a cord that retracted into the case.

I thought it was a fantastic toy.  One day, I plugged it in to play with, but forgot to unplug it when I was finished!  It was extremely hot, and I left the light face down against the seat.  Pretty soon, smoke began to billow out of the windows.

I set the car seat on fire!

The strangest part of the story is that my grandparents weren’t going to tell my mother what I had done.  I guess you could say that I had them wrapped around my little finger!  Later that night, my mom was looking over my preschool papers, which had been on the seat at the time of the inferno.  She called my grandparents to find out why the papers were charred around the edges.

And I thought I’d gotten away without being punished!

Now for the absolute greatest story my family tells.  This one belongs to my mom.

Late one summer, she was mowing her huge backyard on a riding mower.  Rather than rake up all the fallen leaves, she decided to just mulch them up as she cut the grass.

Everything seemed fine, until she began to sense a lot of heat around her feet.  She looked down, and the mower was on fire!  She jumped off and ran for the hose, which was all the way across the yard.

After extinguishing the flames, she checked under the mower deck and discovered leaves packed in around the blade.  The friction had caused the fire.

The great finale to the story is the way she told my dad what had happened.  She waited until they had gone out to dinner, figuring that he wouldn’t yell too loudly if she told him while they were in public!

I seem to have inherited my mom’s penchant for mechanical mayhem.  Maybe that’s why I don’t ever get asked to pitch in on the mowing!