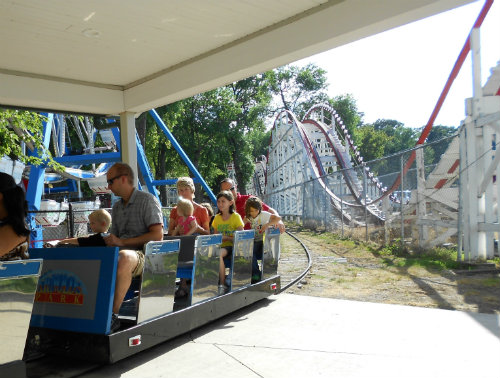 After visiting with my brother for a day in Minnesota, we drove about four hours to Okoboji, IA.  My in-laws have purchased and remodeled a cabin on the lake and organized a family get-together.

On route they told us to drive straight to the Arnold’s Park amusement park.  As part of their Christmas present my in-laws bought season passes for all the kids.  My crew was so excited.  They rode every ride as many times as they wanted in the next four days we spent in Okoboji.

We spent lots of time visiting, eating (My mother-in-law out did herself preparing delicious meals in advance.), and playing Farkle.  This was a new game for me.  I did fine the first time we played finishing in second place.  The next night I was dying to play again and win.  I must have needed some humbling because I Farkled (scored zero points) a record 7 times in a row, which was seemingly unheard of.  There was talk of framing the score card and all manner of nonsense.  That night all I could think of was that if I died in my sleep all they would remember about me is that I had Farkled 7 times in a row!  Thankfully I survived! 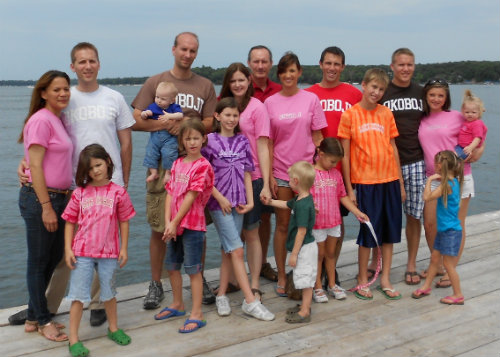 Headed out of the cabin one day my husband yelled, “All the Irish kids go get in the van!”  Then he looked around and realized… “Oh that isn’t going to work here is it?”  It was fun to get together with all the Irish kids!

The men golfed, the kids swam in the lake, the ladies went shopping, and then I decided I HAD to purchase a pass at the amusement park and ride with the kids.  I have always loved rides.  I was having a grand old time when I climbed up on The Spider with my daughter.  This ride is like a spider with seats on the ends of all the spider’s legs.  When in motion the whole ride spins, while the legs move up and down, and the individual seats also spin.  I couldn’t wait.  The ride started and my daughter and I screamed in delight round and round and up and down, over and over and over.  It was so much fun.  My sunglasses flew off.  I laughed and screamed.  On and on we spun around and up and down.  And then I thought it would never end.  How long had we been up there?  Were we stuck?  I was beginning to feel ill, and I had never gotten sick on a ride before.  Just when I thought I could stand it no longer it started slowing down and came to a stop.  “Let’s do it again!” my daughter examined.   I wobbled out of there, so happy to be on solid ground, no way was I going to get right back on it!

There was no wait for the ride (imagine that) so Faith stayed on.  While I waited with my father-in-law, I asked the guy running the ride how long we had been up there.  He said it was about three minutes.  “That was way too long in my opinion,” I told him, and we all laughed.  Then he told us that on his first day no one told him how long each ride was supposed to be so he was letting it run for five and six minutes!  “Five people puked on my first day!” he concluded.  I’m sure they did–crazy!  I laughed so hard my sides ached besides all the dizziness!  I could not imagine five more seconds on that thing, let alone three more minutes!