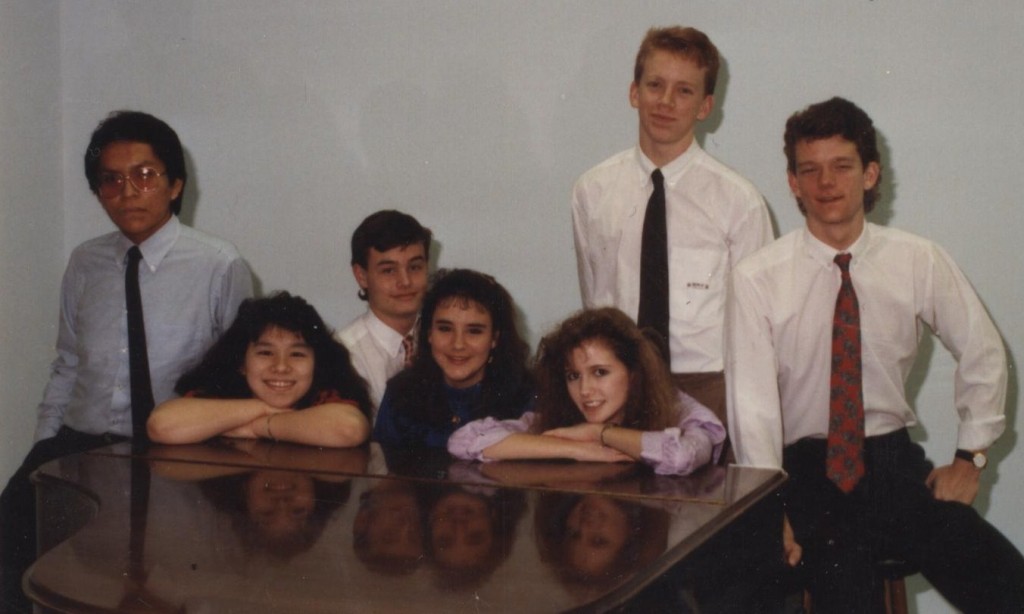 The summer after my junior year at a boarding high school, I was thrilled to be traveling South through Texas and then Mexico with the school ensemble.  For me it was a dream come true.

One of our stops in Texas was the Scofield Memorial Church in Dallas.  It was by far the largest church we sang in, and we were excited that the program would be televised.  Before we went to sing, the girls all filed into the bathroom.  I was having trouble with my dress, which was made of very thin material and was full of static.  It looked horrible and felt even worse.  I had had this problem before and knew what to do.  I took off my half slip (back in the days when women actually wore slips) and meant to get it a little damp in the sink, but before I realized what I was doing, I had stuck the whole thing under running water and completely soaked it!  Well, I couldn’t go on without a slip, so I wrung it out the best I could and put it back on.  I looked in the mirror and the wet slip wasn’t that noticeable.  Whew!   The only problem was we had to sit in the pew before it was time to sing.  When I sat down on the wet slip. . .  You can imagine!  I was mortified.  I pleaded with the person that was to walk up behind me to please stay really close so that no one would see my wet skirt.  I just hoped and prayed that it wouldn’t be noticeable and for sure not on TV!  If you ever need to get rid of static, just soak your clothes.  It works every time!

After the service, when fortunately my dress had dried, we had a pizza lunch with the youth pastor.  Most of us were doing our best to make conversation and use our manners.  I was answering the pastor’s questions and telling him that I had been born on the mission field when I looked over at Jon, one of the guys from our group, and he was beat red with his napkin over his mouth.  “What is the matter?” Every one stopped and waited for his response as he swallowed his pizza and took a deep breath.

“I don’t know about you, but I was born in a hospital!” he almost shouted and once again going into fits of laughter.  So much for us acting civilized!

A few minutes later Maria, another girl in the ensemble, was telling a story about something that happened in a volleyball game.  We liked to tease her about how much she used her hands when she talked.  This time with pizza in hand she said, “I went like THIS!” and accidentally sent the half-eaten slice of pizza sailing.  It hit the youth pastor right in the chest and then fell on his plate!  “Oops.  Sorry,” she said and grabbed her pizza, placing in back on her own plate.  All of us then lost all the composure we had left.  To his credit, the man was very kind.  I guess maybe he was used to groups of silly teenagers.  That’s the last thing I remember of our stay at Scofield Memorial Church.