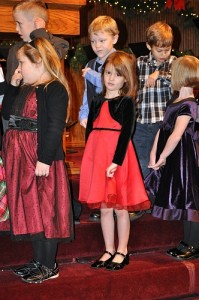 The children’s choir that Joy is a part of sang during the church services a couple of weeks ago.  Joy sang all the words and did everything she was supposed to do.  Someone even commented to her afterward, “I enjoyed watching you sing your heart out!”  As she sang I couldn’t help but think that it didn’t seem so long ago that she was making a spectacle of herself in the Christmas concert!  That is one of my favorite stories about my children.  I will have fun sharing it with her when she is grown.

Shortly after that “school” concert Joy sang in our church choir.  It was only going to be two songs and not a whole hour of her standing on stage, but I was a little worried about her not cooperating.  For the first song the directors handed out maracas for the kids to shake while they sang.  This was perfect for my little girl who had a  really hard time standing still.  After the song the director went around with a box for each child to return their maraca.  I saw the twinkle in my daughter’s eye.  I knew she was up to something.  I watched closely.  When it was her turn to put the maraca in the box she smiled sweetly, put her hand in the box, and FAKED returning the maraca.  Oh she was so proud of herself.  With her other hand she held it behind her back and her face just beamed.  This might have worked well for her had the next song  not had motions.  She didn’t know what to do then.  She looked anxiously around and finally dropped the maraca on the floor!  One of the directors had to go and pick it up.

Recently my little boy did not cooperate during his “school” concert.  Is it always my kid?  Ah well, children are an adventure.  It is so fun to see them growing and maturing…and a little sad.