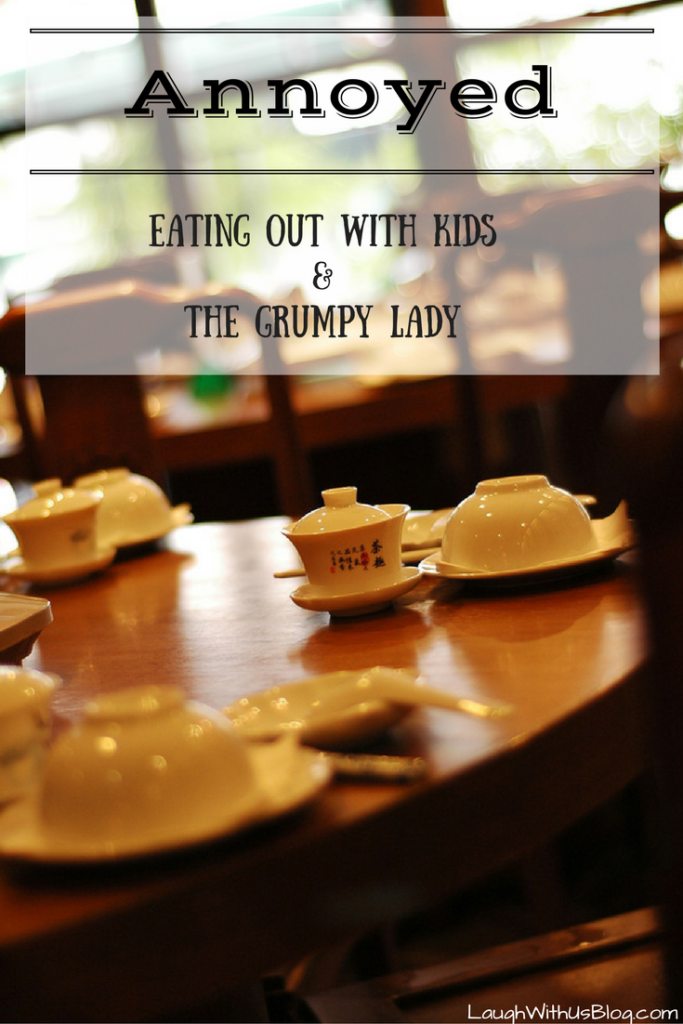 Annoyed. I was significantly annoyed.

I had taken some time away to enjoy a fast food meal with three of my kids at one of their favorite places to eat. We grabbed our food, and though the restaurant was mostly empty I purposely chose an area where there were no other people.

As we sat down and began to eat a lady along with her elderly mother came and sat directly behind us. I didn’t think too much about it. We were having a blast. When the kids finished before I did I began our regular finish the story game. One person tells a part of the story and then stops and it’s the next persons turn. You get the idea. Even my four year old loves to play and takes part enthusiastically.

It was Bobby that added a particularly humorous portion to the story, and we laughed uproariously. “Shhh! We’re in a restaurant. We have to keep it quiet.” I told the kids and looked around apologetically. That was probably my mistake. The lady behind me caught my eye and like the proverbial librarian looked at me sternly and said, “You ARE being rather loud!”

Humph! I was very annoyed. Seriously! My kids were behaving like little angels. Believe me I know their other side well. Ha ha! Lots went through my mind but wow we were still in an empty restaurant and they DID come and sit right behind US. The nerve! I was trying to be considerate, but grief! I felt like pulling out my nineties moves and shouting, “As if!”

The mood was kind of spoiled, and we left…annoyed.

About a month later I was with my whole clan at the same place having lunch. We try to go before or after peak times to avoid the crowds. There we sat in the empty restaurant and who should come and sit directly behind us, but the same lady and her elderly mother! For real!

I did not make eye contact with the lady, but I could not stop smiling. No, we didn’t cause them any trouble. Shame on you for thinking I would! 😉  In fact, we were through eating so we left the two ladies in peace. I don’t know. I’m sure I’m strange, but the fact that they came and sat behind us in empty restaurant TWICE that just made my day. I found it so fabulously hilarious!