Do you remember that post I wrote several years ago, “I kissed dating goodbye?”  The funny thing about that is that we have started to date again on a regular basis.  Ha! It’s not that I was ever AGAINST dating your spouse.  I always thought it was the best way.  I just came to the point where I realized dating wasn’t necessary to my happiness, and that the lack of dates with my spouse didn’t mean he didn’t love me.

I think the change is mostly due to changes in our lives.  Jason is a very spontaneous person so planning a week ahead for a sitter etc and then committing to do something that cost money…it just wasn’t his thing.  Now our daughter is old enough to babysit once  in a while, and we can just up and go spontaneously, which is actually more like how we dated before marriage.  It’s been a lot of fun! 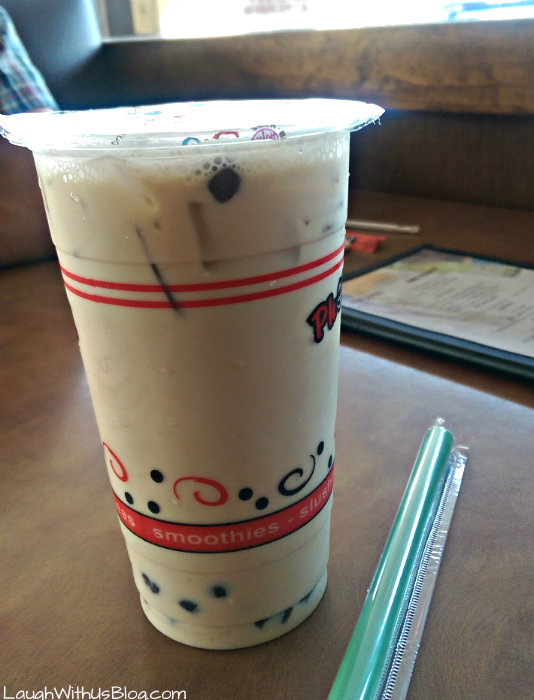 Last weekend we went to Pho V Noodle House in Bedford, TX.  I was so extremely excited to have my first Bubble (Boba) Tea!  I’m told it is grammatically stupid to place ten exclamation points after a sentence for emphasis.  I’m supposed to be much better at expressing my excitement with words, but if you’ll just picture a hundred exclamation points right here then maybe you’ll feel my excitement.  Bubble Tea has been on my bucket list for…about twelve years.  I love tea, and well I just love to experience fun, yummy drinks of all kinds, but Bubble Tea just sounded over the top.  I had no idea how to drink it.  A lady at a table nearby saw me trying to get the plastic off the glass and instructed me to just stick the straw in it.

I ordered the basic Milk Tea as I wanted to get the flavor of the real thing before experimenting with other flavors.  It was AMAZING! (I think it’s considered equally stupid to use all caps for emphasis but you know…oh well! Ha ha) 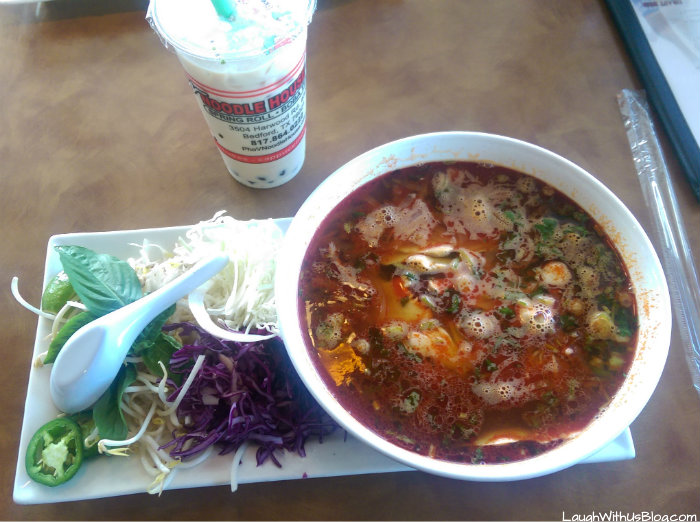 I also had Tom Yum Soup!  When deciding on the soup I went with Tom Yum, because I was told it would be spicy.  It was delicious, but about 15 more sliced jalapenos would have made it just right.  Still, the meal was so good. 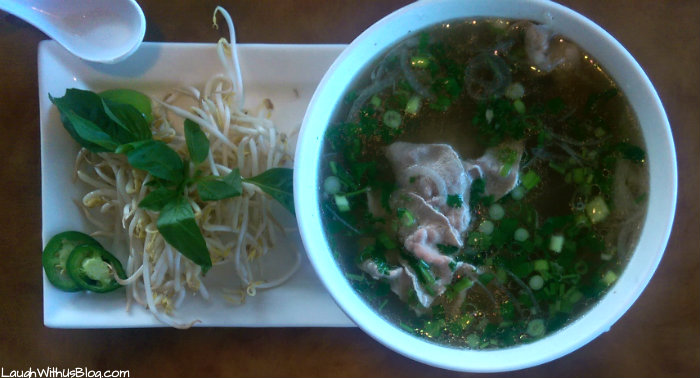 Jason ordered Pho (pronounced “fu”) soup. I was especially interested to taste this as a friend of ours from China is absolutely crazy about Pho soup, though this being a Vietnamese restaurant I might still need to try the Chinese version.

What a blast we had trying new foods and talking without being interrupted five times per sentence.  I’m loving this new stage of life.

Now if my husband would like to help me tackle that bucket list, I’ve wanted to go to a drive in movie for about…35 years.  Hint hint!