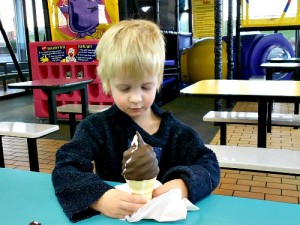 It’s hard to believe that I began planned one-on-one time with the kids in September and I still have not taken all of them out for their date!  I suppose I am much slower these days!

Little Jason has had a rough time with the new baby transition.  It seems like he is left out much of the time.  Over the holidays Daddy spent endless hours on the Wii with the girls.  That used to be when Little Jason would come hang out with me, but now he finds me feeding or holding Bobby.  I do think he is feeling neglected.  And just look at him, the poor boy needs a hair cut–for crying out loud!

So when I needed to run a quick errand I invited him to go with me.  He held my hand as we walked around the store and was as sweet as could be.  His eyes lit up when I asked him if he’d like to go to McDonalds for ice cream afterward.  He was so excited he wouldn’t even look up for a picture.  I had fun watching as he licked and chewed on the dripping cone.  When he was half way through with  it he set it down to go look at something.  It fell off the table with a splat.  He was so upset.  I picked up the gooey mess and handed it back to him telling  him to eat it anyway.  We still believe in the three second rule around here!  He was dubious at first, but then finished it off without putting it down again.

He felt so special when he told the girls where he went, and they were all jealous.  Yes it is hard for this new mother of five, but I will keep looking for those opportunities to take them out individually.  It is so worth it!