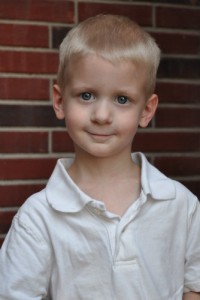 My sweet Little Jason cracks me up.  The way he says things as well as his choice of words get people’s attention quite often.  He’d been sick with a cold and one morning woke up with his voice mostly gone.  He came into my room and asked, “Mom, why am I talking weird?”  The poor little guy didn’t recognized himself!

I had made tostadas for lunch.  They were actually more like nachos for the kids since they only had refried beans and then cheese on top.  He took one look at his and asked, “What is that colorful stuff?”

“You mean the cheese?”

This particular time I had purchased a Colby and cheddar mix so it was yellow and white–that colorful stuff!  🙂

Another evening I was standing in the kitchen at a friend’s house.  Little Jason came up with huge eyes and said, “It’s scary!”