Continuing his story from yesterday’s post, my dad Hal is sharing his story of traveling through Central America on the Pan American Highway, 1963.  Enjoy the third episode in his journey:

In Laredo I met Dr. Stan Orth and his family, who were also new missionaries on their way to Costa Rica.  We were going to drive together.  I felt very confident, having someone to travel with.  We crossed the border in the morning.  The Mexican officials looked in my trailer, looked at me, talked to each other, and finally said, “We cannot let you drive into Mexico. We don’t know what you have in this freezer.  Actually, in the trailer, I had a large twenty-one foot chest deep freeze, filled with all our cooking utensils, dishes, and what other household goods we possessed, packed with extra clothing and bed sheets. 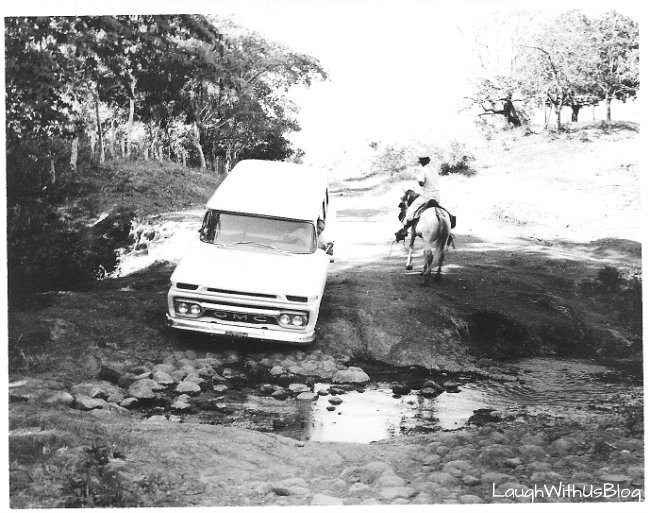 The Carryall Dad traveled to Central America in

Our freezer was basically the only thing of importance we had besides our vehicle.  The summer before we married, two years before, I had worked all summer in Oklahoma before going back to Columbia, South Carolina, to get married and finish my last year of Bible College.  I bought the freezer and a cow and a hog to put in it.  My mother, who raised thousands of chickens at a time in large chicken houses, gave me twenty-five chickens dressed and ready for the freezer.  I also bought twenty-five pounds of frozen strawberries. Then one of my sisters gave me about that many bags of frozen apples for pies.  For my last year of Bible College and our first year of married life, I planned for us to eat very well, though we were living on my G.I.Bill.  (Frieda also had a job typing catalog cards at the public library. She made $40 a week.)  All our school friends wanted to be invited to eat at our house that year.  It never occurred to me that we couldn’t take our freezer to the mission field with us.  Frieda, who had experience living with her parents in Central America, had always flown down and had no experience of land travel.

Well, the Mexican border officials at Laredo didn’t even look in my freezer.  They just didn’t let me into Mexico.  I was very disappointed because I was really counting on being able to travel with the other missionary family.  I drove to Edinburg, Texas, where I had some friends.  My family had lived there for four years when I was in high school.  My father had sold the ranch in Oklahoma and bought citrus orchards in the Rio Grande Valley, but after a rare freeze ruined his orchards, he traded the house and land in Texas for a ranch in Southwest City, Missouri.

A friend I had known in high school let me leave my trailer in a chicken house on his property near Edinburg.  We didn’t see the contents again until we came back four years later on what used to be called “furlough,” but is now called “home assignment” so as not to give the mistaken idea of missionaries taking a year-long vacation.

I went back to the border at Reynosa and crossed the bridge into Mexico, pulling my almost-empty trailer, and this time I was allowed to cross.  I think I paid the official ten dollars, and he didn’t even look in the trailer.  He was very happy, and I was glad to be on my way through the city of Reynosa, though it appears I could actually have taken my freezer.  In fact, on the rest of the trip nobody even looked in the trailer. It was about a week since I had left Frieda in Houston, and I had no way to let her know about my delay as she waited for me in Nicaragua.

Click here to read about the first attempt at driving in Mexico.