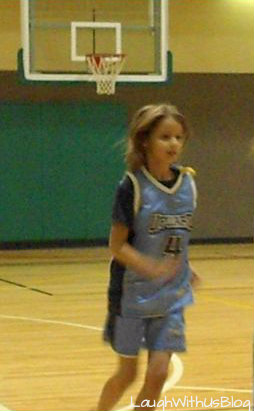 I’ve always heard of those horrible parents at children’s games and wondered what was wrong with them.  How can they yell at their poor children who are just learning to play a game?  How can they get ticked off at the opposing players who are also children?  What would make people behave this way?

Well, while I’m in confession mode I have to say that my perspective is VERY different after having been to my daughter Joy’s basketball game.  While I did contain myself and only said what I was thinking to my husband, I FELT like doing some of those crazy things.  I felt like one of those horribly competitive parents!  Instead of just cheering my daughter on and noticing how she has improved, I noticed all the things she wasn’t doing, but was supposed to.  I found myself commenting things to my husband like, “What?  Doesn’t she know she’s on offense?  She’s not supposed to be guarding that player for crying out loud!  Didn’t you teach her how to dribble?”  And all this coming from a mom who was never athletic and never played sports!  What was wrong with me I pondered?  My poor daughter had only ever played two games!

It was such a strange feeling.  Even though I never played sports, I really do enjoy watching sports, and I tend to really get into the games.  My reactions to my daughter’s games came, I think, from a habit of watching and commenting on sports.  So when I watched my daughter I just reacted like I always have.  It’s not so strange really.  Thankfully, she wasn’t aware of her overly competitive mom on the sidelines.  And thankfully she has a great team of coaches who do a wonderful job of training and building the kids up without putting them down at all when they make mistakes.  I will go to her next game more prepared, but it was humbling to think of how I have inwardly looked at all “those” parents with contempt when I so easily could be one of them!