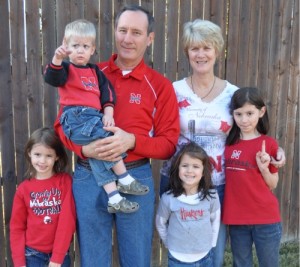 It was a Thursday and I was sick–the kind of sick when a mom throws on some clothes, drives to the nearest Redbox, and rents the kids a couple of movies so that she can crash on the couch.  I did nothing on that day, nothing but rest, that is.  My in-laws were coming the next day, and I figured the best thing I could do was rest.  I hoped I’d have the energy to clean the house the next morning.  We’ve gotten into the habit of cleaning and picking up the house for a half hour after nap time, but on this day I didn’t have the energy.  I made sure the kids straightened up their own rooms, then let them watch TV.  Again I crashed on the couch.

The door bell rang.  I wasn’t expecting anyone and almost didn’t get up even to see who it was, but curiosity got the better of me and I went to the door and tip toed so I could see through the peep hole.  There stood my in-laws from Nebraska.

I threw the door open and greeted them with my stringy hair and no make-up (thankfully, I was dressed).  “Hi!” was all I could say.  Then in very Esther fashion (thinking fast when I’m flustered is not my best trait), I blurted out, “I’m so…surprised!” as we all still stood there in the door way.

“Why are you surprised?” asked my father in-law.

Still big eyed and open mouthed I replied, “I thought you were coming … tomorrow!”  Then realizing we were all still standing in the door way, I gathered my wits and invited them in.  They were just as surprised as I was that we weren’t expecting them!  I told them truthfully that I didn’t mind one bit that they were here a day earlier than I expected.  I love having family stay with me, and as I told them, that way I had a good excuse for the house not being perfectly clean!

We are not sure where the communication broke down.  My father-in-law thought he told my husband that they were coming Thursday (and he may have) but my husband remembered Friday.

I’d like to say that’s what happens when the women leave the planning to the men, but that wouldn’t be very nice now, would it?