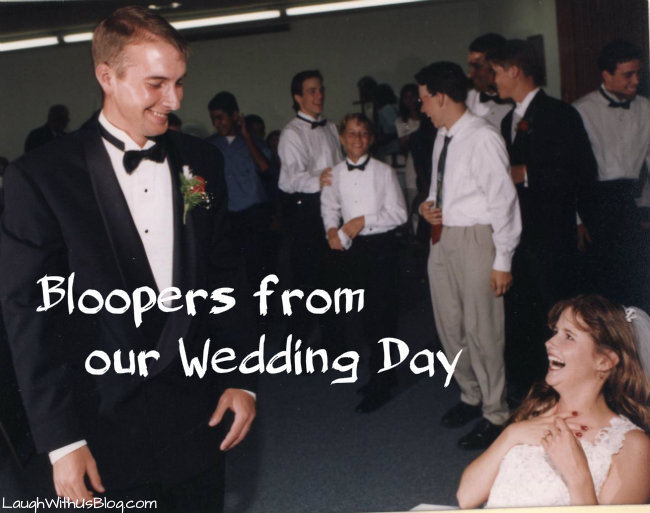 We’re celebrating 20 years married today! What better way that to remember what all went wrong on our wedding day? Ha ha. They say something goes wrong at every wedding…

My wedding day began like most any bride’s.  I was excited and nervous and worried and happy.  I arrived at the church early so that I would have plenty of time to get ready.  I noticed that people were looking at me strangely.  They would raise their eye brows and walk the other direction when they saw me coming.  “What is the matter?”  I finally grabbed some one and asked.  “Uh, there is a little problem with the air conditioner.  But don’t worry, we’re working on it.”  We had borrowed a church in Edinburg, Texas, where my parents lived.  It was July 26, 1997, and the weather was characteristically hot, over 100 degrees.  Having been raised in South Texas, I never gave the heat or humidity much thought.  It was no big deal.  You just go from one air conditioner to the next.  No problem.  But we had a big problem!  And Jason’s family, who were from Nebraska, were not as used to hot weather as we were.

As I was getting ready, the church was getting hotter and hotter.  I began curling my hair in tight little ringlets, and before I finished the second side, the curl on the first side was almost completely out.  I literally curled my whole head of hair three times.  In the end I just had to give up and go on with wavy hair. It was the worst possible time for a bad hair day!  A couple of times someone would check in with me saying, “We’re doing what we can.  Don’t worry.”

They finally got the air back on just a few minutes before time to start, but with the auditorium already full of people it didn’t do much good.  I remember standing in the back of the church with my Dad.  Well, at least I didn’t have to wear a suit coat!  “Coke!  Does any one have a Coke?”  The image is frozen in my mind of someone holding up the veil so that I could drink my Coke.  I couldn’t leave that part out!

I have to stop here.  The pianist.  Words fail me.  She came highly recommended.  She said she could play anything in any key with or without music and had played for ten weddings that summer.  We hired her.  We actually gave her money.  The moment arrived when it was obviously my turn to walk down the aisle, but whatever she was playing, it only vaguely resembled The Wedding March.  Later a friend asked, “Oh, was that the wedding march?  I had heard that some Christians marched in to a hymn, so I thought it was just one I didn’t know.”

My father gave me away, and as we were standing at the front of the church, someone had pity and placed a fan aimed at us.  Well, it was a vacillating fan, so my veil was in complete flight.  This way.  Then that way.  Then this way.  It felt as if the whole audience was swaying from one side to the next in unison with my veil.

Thankfully, for my sister and brother-in-law’s vocals we had sound tracks.  But I had asked my brother, who has a great voice to sing a bilingual version of, “My Tribute” since many members of my parents’ church spoke only Spanish.  The “pianist” started it way too low so my poor brother was practically growling when he started the “How can I say thanks…”

So we were pronounced man and wife.  After all the many pictures and poses we proceeded to the small reception.  One of my favorite memories is after I had thrown the bouquet, Jason discreetly took the garter.  And then in one quick motion, he turned around and threw it over his shoulder bride’s bouquet style.  It was just so unexpected.  I laughed and laughed about that.

Later on that night, (now don’t get nervous here) after we had fallen asleep,  I woke up with his hand on my belly.  “Oh that’s so sweet.” I smiled to myself.  I reached down happily to hold his hand.  Jason sat straight up in bed and screamed at the top of his lungs, “Arghhhhhh,  Arghhhhhh!” for several seconds.  “It’s me.  I’m your wife, I’m your wife.”  He lay back down.  Whew.  Thinking that he was awake and all was well now I once again reached down and grabbed his hand.   “Arghhhhh, Arghhhhh!” he screamed.  And thus began our married life…

Married life has been an adventure and things have rarely gone according to MY plan. Just like the wedding day there has been lots of love, shockers, screams, and laughter. So thankful for the laughter!

What went wrong at your wedding?

Follow this link to continue reading about our honeymoon.  🙂