When we first got married, I was teaching full time and taking six graduate hours each semester, while my husband was finishing his degree. So two years later when my husband took his first job, I was able to stay home and focus my efforts on being a wife and homemaker.

We didn’t have any children yet, so I spent my days planning and fixing all different kinds of delicious (usually) meals. When my husband’s birthday rolled around, I decided I would make him a birthday cake (his first from me.) Neither one of us like cake all that much, so I didn’t want to make a huge cake that would end up being thrown out. I had the bright idea to make a little cute cake that would serve it’s purpose and be gone!

I went the store and bought an Easy Bake Oven Children’s cake mix for $5. I never got to make those when I was little. The package said it made two cakes, so I thought that would be plenty. I already had a cute little pan.

On Jason’s birthday I went to work making a little cake. When it came out of the oven, I realized there was no way it would be enough. It was about the size of half of a cupcake. I made the other cake only…one was chocolate and the other vanilla. They would just have to do! When it came out, I looked at my two little cakes. I now had the equivalent of one whole cupcake. This would never do!

I drove back to the store and bought…another Easy Bake Children’s cake mix package identical to the first one. I went home and, since I only had one pan, baked them one after the other. I prepared the frosting packages that were chocolate and vanilla and stacked the cakes and spread the frosting into a four layer little mess! 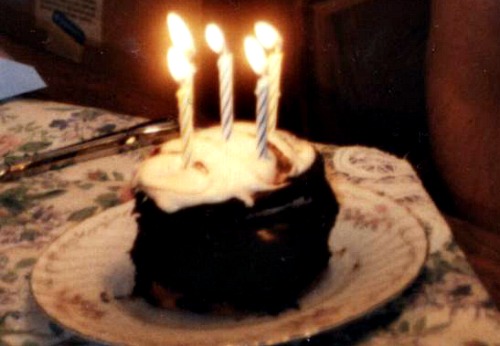 My wonderful creation on a small dessert plate!

It was only after I had finished that I realized I had spent $10 on a cake that we would finish in one serving when I could have spent $2 on a regular cake mix…oops!

The cake wasn’t much to look at, but Jason raved that it was really good, maybe the best he had ever tasted…until I told him how much it cost!

Well I’ve come a long way since that poor little excuse for a cake, but I continue to make silly blunders on a regular basis.

Happy Birthday tomorrow to my husband Jason…may there be a million more laughs along the way!