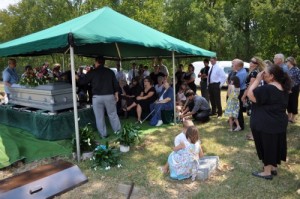 I was leading the class I tutored.  That day we were learning about a composer.  I don’t remember which one it was that day, but we were listening to the music via CD while the kids drew what the music made them think of.  When they were finished, each child who wanted to got up and showed his or her picture to the class, explaining what it was.  The drawings were of things like ball room dancing and animals playing in the grass.  My daughter was the last one to show her picture.  She said, “It made me think of death.”  We all looked up in shock, and more than one sucked in a breath.  Faith showed her picture of a person lying in a casket and several family members standing around crying.  Sometimes I don’t realize how deeply things affect my children.

In the last twelve months we have been to four funerals.  We have lost a grandmother, a grandfather, an uncle and a close family friend.  I also had a miscarriage, and I know that hit my children quite hard as well.  So we have talked about death a lot.  It is a frequent topic over meals and on our drives.  They want to know if I’m going to die.  Are they going to die?  This has been a great opportunity to talk about these things because the truth is that we are all going to die.  We just don’t know when.  I tell them that I may live to be a hundred or I may die tomorrow, but that God is always faithful and that they need to trust Him and lean on Him when they are hurting.

I have seen parents make the mistake of telling their children that God is always going to take care of them, leading them to believe that nothing bad will ever happen to them.  Then when horrible things do happen, (and inevitably they will), these children question everything they have ever believed about God.  They question their parents:  “You said God would take care of me.”  God never promised us a life of constant ease.  The Bible is full of examples of people who died because of their faith or that suffered for reasons that they did not understand (Job or Joseph).  I need to prepare my children to be ready, to know where to turn when hard things happen.

Still, sometimes others don’t understand where my children are coming from.  One of my girls told a classmate, “You’re going to die.”  I can see how this would be disconcerting.  The little girl went to her teacher in tears.  The teacher handled it well, but I think she expected me to be shocked when she told me about it.  Only after I explained our year of funerals and discussions did she understand that my daughter did not intend to be hurtful.

My job as a mom is an exciting yet a sobering one.  I continue to strive to teach my children and to trust God with them.