One day early this year I noticed a tiny white dot on my eight year old son’s face as I gave him Tylenol for a fever. His face caught my attention, but I didn’t think all that much about it. The next day the dot was a little bigger. It looked like an ant bite. The following day it looked like a pimple. I knew he was way too young for a pimple. After another night it doubled in size, and I began to worry. His lymph node was also extremely swollen. My sister had noticed his face and said it looked like a spider bite and urged me to take him to a doctor. That night I googled his symptoms, scared myself half to death, woke my husband up, and took him to the ER late that night. 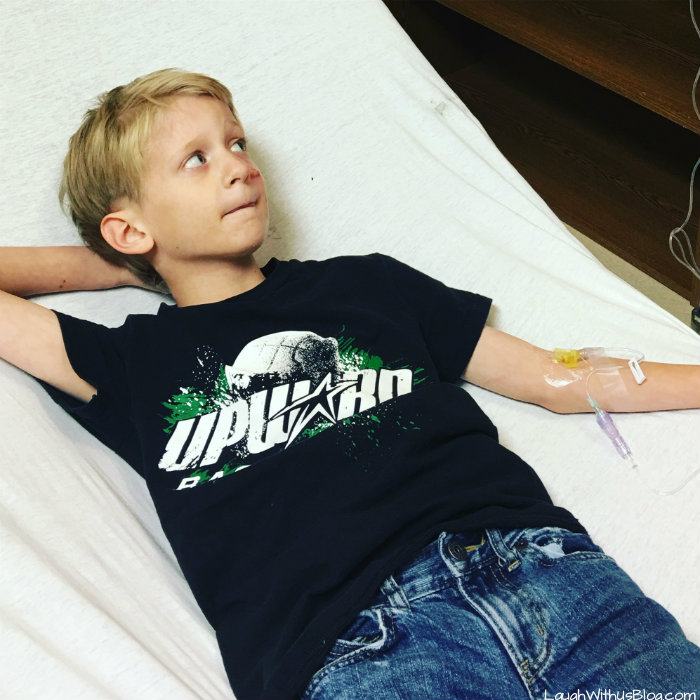 To my surprise the ER doctor looked him over and then said she was admitting him to the hospital for a possible staph infection. They said they thought it started from a boil on his face, but his lymph node under his chin was extremely swollen as well. They ordered a CT scan of his neck to make sure the swelling wasn’t blocking any airways. With the infection on his face there was concern of it going to his eyes and brain in addition to possibly blocking airways. I was in shock. 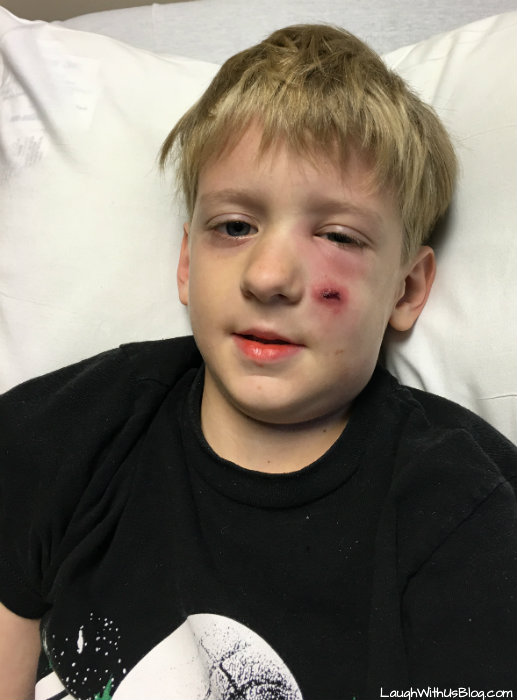 It took most of the night to get him transferred to a room and settled. We saw the hospital doctor on her morning rounds. She was concerned that his face continued to swell even with the IV antibiotic so she added a much stronger one, and would be monitoring him for complications from the antibiotic. As all this went on we waited to see a specialist. Oh my poor sweet little boy. 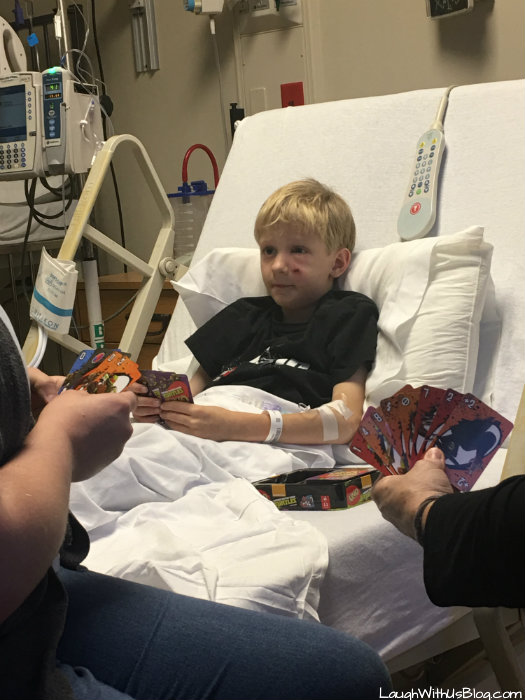 That evening we were finally able to see a surgeon. He switched antibiotics again as Little Jason’s face was still continuing to swell. He said that if the antibiotics didn’t start helping by the next day he would surgically drain the abscess. In spite of everything he had a good day and got to play lots of games.

Me? I didn’t get much sleep. I prayed for my boy the whole night long. To watch your little son’s face grow worse and worse with the strongest antibiotics available to him… I just felt so helpless. I knew I could lose him and to sit there and watch his face grow worse by the hour was heartbreaking. 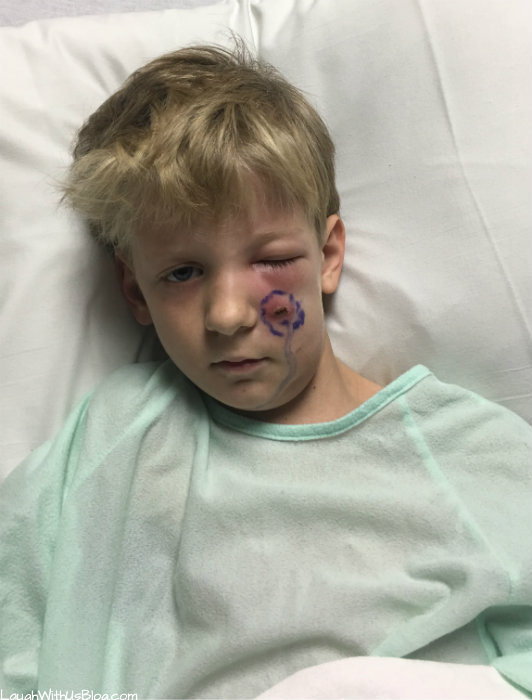 By the next day Little Jason’s face had grown so swollen that he could no longer open his eye.  Surgery to drain the abscess was scheduled for late that morning. The waiting has almost unbearable as I watched my son’s face get bigger and bigger. Morning turned into afternoon and still the surgeon didn’t arrive. I was so thankful for my sister Sara who came and helped distract me and entertain Little Jason. She finally went to the nurse and pleaded for us. The nurse got on the phone with the surgeon, and he arrived within the hour.

Next came the agonizing wait during the surgery, but in less than an hour the surgeon took me to him and said everything had gone well! 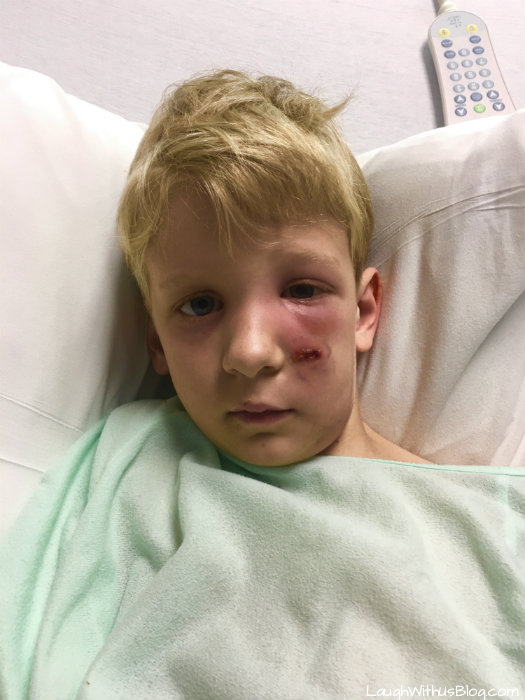 Soon after he awoke from surgery he was able to open his eye again so swelling is really going down!!! Also the lymph node area that was so swollen was much, much smaller. Wow! We were so thankful!

It was then that other things began to sink in. Like the fact that we had chosen a $10,000 deductible. It seemed like a good idea…at the time. Ha ha! The doctors kept him in the hospital on the IV antibiotics for three more days. It was my first hospital stay with a child. Keeping him entertained became a challenge as he began to feel better. I can’t tell you how thankful I was for every gift that was sent to him and every resource available to him at the hospital. What a difference it all made! 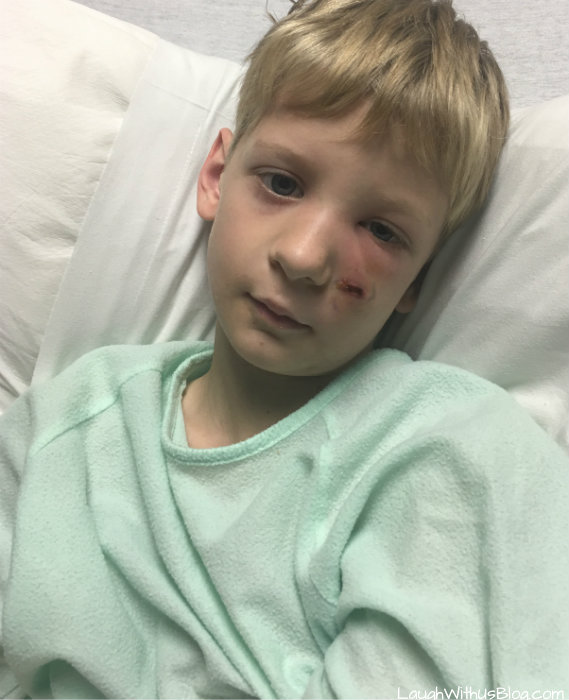 Cellulitis is what the doctors kept calling his face. It turned out the infection was from a rare bacteria called Nocardia. Doctors speculated he probably got it from playing in the dirt, not washing his hands, and then touching a small cut (bite) on his skin. He was referred to an infectious disease Dr who kept him on antibiotics for an extended period of time.

The next four weeks we kept him home and gave him daily does of antibiotics. Just when we thought he would be well, he landed in the hospital once again.