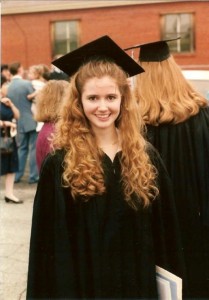 Graduation--Just before that first year teaching.

A friend recently reminded me of the years that I spent teaching Spanish when I was right out of college.  I looked so young at the time that I often was mistaken for a student.  I thought it was great fun.  Several times I would be standing in the hall counseling or reprimanding a student when a teacher would come out and yell, “Girls, get to class.”  The look on my co-worker’s face when I would turn around was priceless.

My favorite incident happened during a basketball tournament at our school.  One student that was in my Spanish class could not stand me or my class and let me and everyone else know it on a regular basis.  He was a great athlete and popular with the other kids.  I think he was pretty used to getting his own way–something that didn’t happen in my class.  During this tournament, our classes were all excused to watch the games whenever our teams played, so I also got to enjoy half the day in the gym.

While I was watching the girl’s basketball game, there were several boys talking behind me.  I heard a voice I didn’t recognize ask with interest, “Who is that?”

My student who could not stand me asked, “Who is who?”

“That girl right there,” the other boy insisted.

The horror in the reply could not be mistaken, “Oh, no, man, that’s my TEACHER!”

I pretended I didn’t hear the conversation, but laughed enthusiastically when the story was repeated to me later that day!