I love how Facebook has made connecting with people so much easier.  I had posted on my Facebook page that I was heading to  Nebraska to visit family and that we would be going to the Teach Them Diligently Convention in Omaha.  I think it was the night before we left my brother messaged me that he and his wife Sara would be in Omaha the same week!  They live in northern Minnesota, but it just so happened that Sara had work that week in Omaha and Nathan decided to go along!  I was so excited.  Since they live so far away, we don’t get to see them very often.

After a wild fake out of a meeting place we met them at Valentino’s in Omaha.  We had never been to such a huge Valentino’s, but it proved to be an easy place to visit and eat with the kids.  My crew was beyond tired by this time in our trip, and it showed during dinner.

After a long day of conference they really put on a show for my brother.  They got a kick out of watching Little Jason (our four year old) uh…name the candy sprinkles on his plate.  Yeah, we do try to encourage creativity, but I might have drawn the line at naming candy sprinkles before consuming them!

Grace was having a tough time staying in her seat.  A meal complete with several helpings of dessert contributed I’m sure, but the poor thing tipped her whole chair sideways and crash landed.  Try consoling your child amid heaves of laughter!

And as always happens, just when you think you’ve gotten things under control another issue arises.  This time we all smelled something offensive and Valentino’s wasn’t to blame.  Jason gallantly offered to take the baby out to the van to change him.  I didn’t give Jason another thought while I talked merrily with my family, until someone behind us got our attention and pointed to the window.  Jason was locked out!!  Ah well if nothing else we always put on a show though we do try not to!

It was so great to see Nathan and Sara.  I left kicking myself that I didn’t take any photos, no need to worry though, my brother sent me this one: 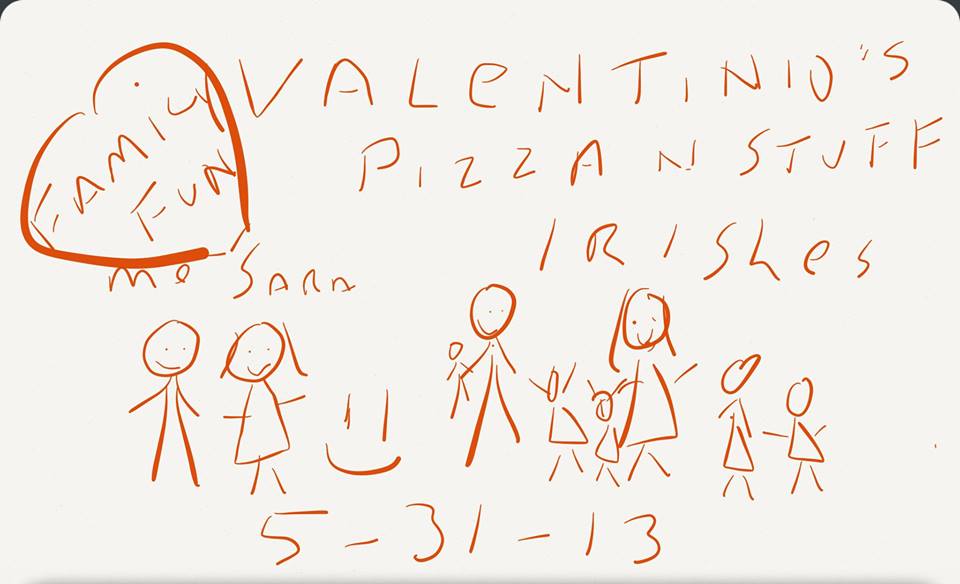