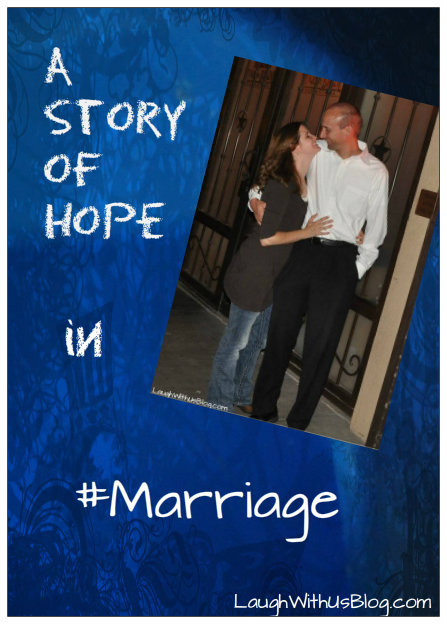 I want to share a story of love and hope with you.  I’ve mentioned a few times on my blog that this last year has been tough.  Miscarriages, job changes, and much more have also taken a toll on our marriage.  I am not going to go into detail.  The issues themselves are not my point.

While I had tried many times to bring things up before my husband, I didn’t think he really listened to me.  Nothing changed.  I was hurting so much inside over so many things.  I was getting no where in reaching out to him and sharing my concerns.  One night in complete frustration and anger I laid everything out for him the best way I knew how.  I gave multiple examples from our lives and biblical support.  Things needed to change!   I think I went on for over an hour.  To his credit he listened without defending himself even though he didn’t always agree with me.  Neither did he attack me.  He waited until I was completely done.  I could tell that for the first time he really could see where I was coming from on many issues.

Jason is a kind man.  He is rarely intentionally mean, but I don’t think he realized until that night that some things were wrong.  Before that I think he felt right and justified in his actions.  I had a small glimmer of hope.  He had a sermon on DVD about being a godly husband that he had recently purchased.  I was touched that he had purchased it in the first place.  He asked me if I’d watch it with him.

Two days after my long talk with him, we sat down to watch the DVD.  And here is why I’m sharing this story with you.  As the preacher began, my husband kept looking at me.  The things he was saying were exactly what I had told my husband that night.  “I like this sermon!”  I laughed and joked with my husband.  But as he kept preaching he kept addressing all the same things I had brought before my husband practically in the same way I had said them.  I didn’t say anything.  I just kept watching wondering if my husband saw the similarities.  Finally, my husband stopped the DVD.  “Have you seen this before?”  he asked me.

“No, but it sounds a lot like what I said the other night doesn’t it?” I just sat there kind of in shock.

“Down to the illustrations!” exclaimed my husband.  And it was true.  It really sounded like either I had copied the preacher or he had copied me.  He pushed play, and we kept watching.  The similarities didn’t stop.  It was one of those moments when hair on the back of your neck stands straight up.  Then I started sobbing uncontrollably.  God cared so much about what I was going through that He had moved in the heart of my husband to purchase this DVD to confirm what I had told him.  I felt so incredibly humbled that I had felt so alone in my pain.  I was never alone.  God was always there.  He cares for ME, even me!

When the sermon was over I asked Jason if he felt like God had spoken from heaven directly to him.  He responded with a resounding, “Yes!”

No matter what you may be going through, with this post I hope to encourage you to keep pouring your heart out to God.  You are not alone.  He cares for his own!

*As always posts about my husband are only shared with his blessing.