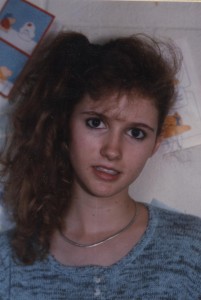 While I was at boarding school, there were certain school breaks when everyone had to leave the dorm.  My parents lived too far away for me to go home other than for Christmas and summer breaks, so I had to rely on kind-hearted people to take me in.

On one particular break an elderly couple took pity on us and invited my friend Carol, who was also a missionaries’ kid, and me for the long weekend.  Well, we were not the proper young ladies that this couple expected, evidently, because it became obvious that the lady of the house just didn’t approve of us.  We tried to be polite and help out around the house, but, quite frankly, I think we just drove her nuts.  There really wasn’t anything for us to do.  They didn’t let us watch TV, which would have been a big treat since we didn’t get to watch it at school.  There were no games to play.  Although we tried to talk to her, she was just not a kindred spirit!

She finally sent her husband to drive us to the mall in Tulsa, which was an hour away.  I think she just wanted a break from us.  We were SO excited . . . .   Only to find out when we got there that the man was going to walk around the mall with us the entire time!  I’m sure he felt responsible for us, but we were dying for a little freedom.  So our greatly anticipated trip turned out to be kind of a bummer.

The next day our hosts had guests arriving to join us for lunch.  The food was ready and the table was set when they arrived.  One of them introduced the visiting man to us first, saying, “Carol, this is Carol.”  Well, I had never heard of a man named Carol, but for my friend Carol to be face to face and shaking hands with a man named Carol was just more than I could bear.  A laugh burst out of me and there was no stopping it.  The more I thought about it, the funnier it seemed.  My friend Carol would normally have been more dignified, but with me laughing like a hyena, she couldn’t keep a straight face either.

The horrible thing is that no one else laughed.  I mean, they didn’t even crack a smile.  Our hosts were extremely embarrassed by my outburst.  I, on the other hand, wondered how these people had lived this long with absolutely no sense of humor.

Yes, I was a silly school girl.  Even my parents would probably have been ashamed of me on this day.  But to tell you the truth, if this happened again today, twenty-some-odd years later, I can’t promise you that I wouldn’t have a very similar reaction!

“It’s so easy to be wicked without knowing it, isn’t it?”
– Lucy Maud Montgomery, Anne of Green Gables

My tip of the day?  Laugh.  It is more fun and you just might live longer.  No need to purposely embarrass yourself and those around you though!  😉

I’m linked with Works for Me Wednesdays, Raising Homemakers and Tuesday Tips and Tricks.