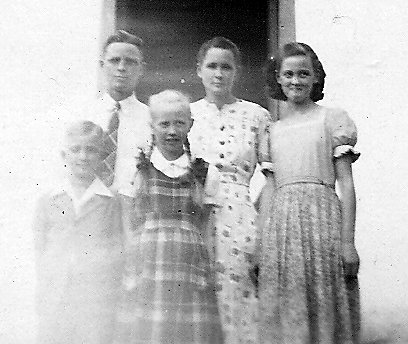 This story from my mom’s childhood made me laugh out loud.  Enjoy!

When I was ten years old (1947) my family moved to a little town in Honduras to be missionaries. My little brother and sister and I went to a boarding school for missionaries’ children in Guatemala seven months of the year, but we were at home with our parents the other five months. In the first vacation from school we learned enough Spanish to play with the local children. (Children usually learn a foreign language with great ease compared to their parents.)

In the second vacation, when I turned eleven years old, I thought I was grown. The children my age at church were children. The girls my age still wore pigtails, but I had a Toni home permanent, which I thought gave me adult status. Furthermore, most of the townspeople were short in stature, and I had almost reached my full height of 5’7”. I didn’t play with the children anymore—I liked to sit and listen to the señoritas talk about señorita things like boyfriends.

There was a very good-looking young man (I’ll call him Gabriel), son of a leading family at church, who “liked me.” He was sixteen. The fact that a teenager liked me made me feel really grown up and special. Our grand “courtship” consisted of sending verbal messages to each other by his sister and catching each other’s eye across the church. The custom of the churches, both Catholic and Protestant, in Honduras at that time was for men and boys to sit on one side of the center aisle and women and girls on the other. Sometimes Gabriel would wink, but I didn’t even dare smile for fear my parents would see me. Since both his family and ours were at church every time the doors opened, we saw each other from a distance several times a week.

Gabriel’s family lived about a block down the street from us, and his sister and I spent quite a bit of time together, but Gabriel was always at work when I visited their house. A few days before I was to go back to school, his little sister came to tell me the sister who was my age was sick and wanted me to visit her so she could say goodbye. For some reason my mother let me go alone to see her. Ordinarily, young ladies of my age, or at least my size, couldn’t go anywhere without at least a little brother for escort. I was ushered into a bedroom, where my girlfriend was in bed. I was told she was asleep and was given a chair. There I sat, feeling very awkward. Looking back, I think I was set up. After a few minutes, her brother Gabriel appeared and took another chair. I don’t remember any more of the conversation, if there was any more, but he totally shocked me by asking, “Will you marry me when you are fourteen?” When I didn’t say anything, he offered by way of explanation, “If we wait any longer you might be as tall as your mother.” (Mother was 5’8”.)

I didn’t answer him. I went away to school, and before the next vacation my parents moved to Panama, so I never saw him again. I have always wondered if he thought marriage would stunt my growth or that height didn’t matter once you were married.