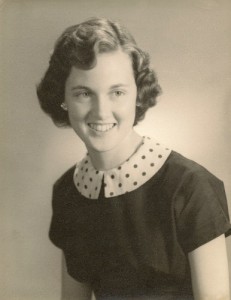 Freida, my mom, is sharing her love story with us today:

When I met Hal “by accident,” as he says, though I don’t believe in love at first sight, I did think he was the most attractive man I had ever met. I told a few friends he was the first man I had met that I thought I might want to marry. But I kept telling my heart to slow down. I was acutely aware that a decision to marry affected the rest of my life and that was scary. I wanted to be sure about everything that it was possible to be sure about.

He was twenty-four years old and had spent four years in the Air Force before beginning Bible college. He was lots of fun to be with, and at the same time he was very serious about life in general and especially about pleasing the Lord. He didn’t immediately ask me to marry him, but I knew he thought of me as a prospective wife. On our first date he asked if I wanted to be a missionary like my parents. Then he asked if I could play the piano and if I could type!

The night we met, we were with a group of friends. The next day when we all went to breakfast, I suddenly wondered if I was taller than Hal. Now, all my life in Central America, at 5’7”, I was always taller than all the guys. I would tell my girl friends, “I’m going to college in the States, and I’m going to marry a tall American.” That morning when Hal and I walked down the street, I tried to see our reflection in the store windows. But before I even figured it out, I decided it didn’t matter. It turned out he was an inch taller than I was, but even if he hadn’t been, I wouldn’t trade him for all the tall men in the world.

On our first real date, I noticed that his curly brown hair that I liked so much had a thin spot at the back of his head. “Uh, oh,” I thought, “he is going to be bald.” After thinking about it for about three seconds, I decided I would think he was handsome even if he were bald as an egg.

For almost four years we “dated” mostly through the mail as he was in one state and I in another, and part of the time I was at home in Nicaragua. When we had been writing for about six months, I got a letter saying he had been in a very serious car wreck. The bone in his thigh was broken in two places, leaving a V-shaped chip out of the bone. The doctors did not know if the two points would grow back together, and he faced the possibility of losing his leg. For a minute I asked myself if I would mind being married to a man with one leg. I quickly decided that as long as he was Hal and it was the Lord’s will, it didn’t matter. I didn’t see him for almost a year as he was in a body cast for several months, then on crutches for a few more. He was still using one crutch when he came from Oklahoma to Alabama to see me again.

Obviously, these were not the most important things I needed to think about before I married someone, but I did continue to try to make wise judgments—probably tried too hard as I didn’t completely make up my mind for four years. And of course, you can’t know everything about a person, no matter how hard you try. I’m still getting to know him after fifty-four years, and I’m still enjoying the process!