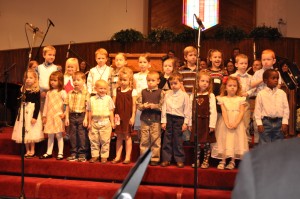 My four-year-old’s first time to sing in the children’s choir at church did not go well.  She knew the songs and the verse well.  She could sing the songs by herself without the music.

The problems all started because of a name tag.  You see, these name tag stickers are relatively new at our church.  The little kids wear them on their back so that they aren’t tempted to take them off, whereas the older more responsible children put them in the front on their shoulder.  You have to understand what it’s like for a four-year-old with two older sisters.  She struggles with feeling left out and hates to be named the little kid.  I saw right away that the name tags were going to be an issue, so after the very first time of putting it on her back and seeing her sisters boast that they wear them on the front, I saw no reason to make my four-year-old wear hers on her back–as long as she was going to keep it on.  So from then on, she has proudly worn her name tag and feels big like her sisters.

That is, until Sunday morning when, after I had put her name tag on her shoulder,  her teacher took it away and put it on her back.  Evidentially she had been playing with it and not leaving it on. Her teacher had no way of knowing that making my daughter put it on her back was synonymous with insulting her.  Well, there was no way she was going to wear it on her back.  Her teacher struggled with her for quite a while, and she still reached back and pulled it off.  I knew she would do this.  I would have gone to get her, but we were sitting on the second pew and church had already started.  None too soon a different teacher just took the name tag away.  Thank you!

My little girl sat on the pew quietly but with a frown on her face, and when it was their turn to go up and sing, she filed up with the class, stood there frowning, and wouldn’t sing.  This all seemed strangely familiar.  It reminded me of someone–ME!

She was disciplined for disobeying.  She should have obeyed her teacher and worn the name tag on her back even if she didn’t want to.  But my heart went out to her because I understood that the issue wasn’t just a piece of paper.  It was so much more.