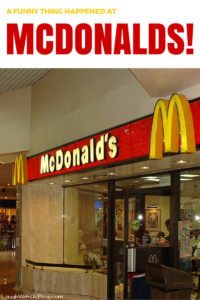 My dear husband is very one-track minded.  This can be a great asset because he can be so intent on something that he can accomplish it under the most chaotic of circumstances—and chaotic circumstances are not rare at our house.  At times, however, it can work against him in a most comical manner.

One evening we were at McDonalds.  We ordered, and I sat down while Jason waited for the food.  As I watched, the cashier handed him the receipt.  Jason stood there for a moment staring at it, thinking that he had been over charged.  Without taking his eyes off of the receipt in his hand, he grabbed the tray of food with the other hand and walked over to the condiment and drink refill counter.  To my dismay he grabbed his 16 ounce glass and proceeded to fill it with . . . ketchup.  With eyebrows raised and eyes bugged out, I just sat there and stared.  Suddenly waking up as if from a trance, he stared at the red substance in his glass.  He looked up at the ketchup dispenser then back down at his glass several times.  Then he just kind of smirked as he walked to our table.  Doubled over with laughter, I suggested that maybe he could go to the bathroom and rinse out the ketchup so he could get his drink.  He didn’t think he could get all the ketchup out.  Full of bright ideas, I suggested he just take the glass to the counter and explain what happened.  It is only on rare occasion that he purchases a soft drink, but forget it–he was going without.

Gallantly, I told him not to worry, that I’d get him a new cup.  I walked up to the counter, keeping a straight face. “Excuse me but my husband accidentally filled his glass with ketchup.  Would you mind giving him a new glass?” I said, as I handed the evidence to the two girls behind the counter.

“Sure, here you go,” came back their quick reply, but the peals of laughter were unmistakable behind me as I walked back to our table, having saved the day!

As always stories about my husband are posted with his permission.  He’s a good sport!  😉