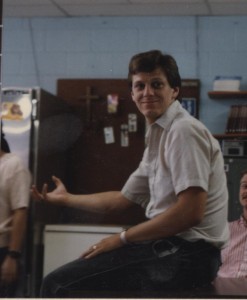 My high school Spanish teacher was my favorite teacher.  It was hard to find subs in Oklahoma that could speak Spanish, so since I was a native speaker, when he wasn’t able to make it to class he would have me teach the lesson, and the sub would sit in the back and supervise.  This is when I began thinking that teaching Spanish might be something I would enjoy.  Well, our teacher was the epitome of cool, making everything fun, keeping us laughing, but always maintaining control of the class.  I wanted to be just like him.

The first day of class he had us do an activity that I thought was very clever.  He had everyone take out a piece of paper and make out a “cool” card with their name on it.  As we all proudly looked at our self-made cool cards, he told us to rip them up.  What?  Yep, we had to rip them up.  Then he went on to explain that in this class we were not allowed to be cool.  To learn a language you have to say things that feel and sound strange and that we were all going to have a good time, but we weren’t going to be cool.  I thought it was genius!

So the first day of my first year teaching Spanish, I decided to copy Mr. Matlick’s cool card activity.  The kids looked at me as if I’d lost my mind, and the illustration was completely lost on them.  I didn’t know them and they didn’t know me, but one thing they knew was that no little Spanish teacher was going to succeed in making them lose their cool.

After I tried this and some of his other ideas that I loved, I found I was just not capable of pulling them off because I am not, nor have I ever been, cool.  I am awkward and silly.  I don’t get jokes until they are explained to me.  I laugh at all the wrong things.  Cool is just not a trait I possess.

I did eventually find my own ground in the teaching world.  What I lacked in cool I made up for in corny. The kids laughed anyway and everything came out all right!