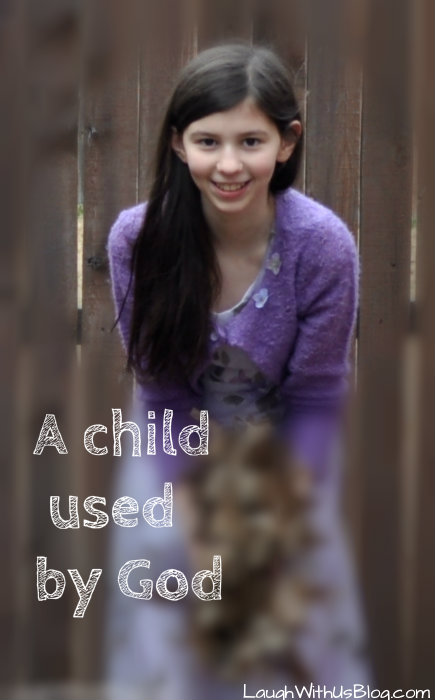 Every once in a while one of my children will really surprise me.  On a day to day basis it seems like I struggle with parenting.  Sometimes realizing things I’m doing wrong and trying to work on them.  Other times I’m wondering if anything I say or do will ever get though to the kids.  They make me laugh and cry.  But once in a while something really special happens.

We were at my parents house.  It was pretty late in the evening and most of the house was asleep, but Jason, my dad and I sat around the kitchen table talking.  Those late nights are some times the very best aren’t they?  Then Faith came down stairs to get a drink of water.  She sat down and listened for a while.  After several minutes there was a lull in the conversation and Faith piped up, “Grandpa, I want to say some verses for you!”  My dad who loves to memorize Scripture and encourages others to do the same was very happy to listen.

Faith had on her own memorized Psalm 3.  At the time Jason had been playing a dramatic recording of the Bible during our family worship time and Jason also reads the Bible very dramatically after years of listening to the Bible on CD.  Faith opened her mouth and loudly and dramatically quoted Psalm 3 in it’s entirety!

3 But You, O Lord, are a shield for me,
My glory and the One who lifts up my head.
4 I cried to the Lord with my voice,
And He heard me from His holy hill. Selah

5 I lay down and slept;
I awoke, for the Lord sustained me.
6 I will not be afraid of ten thousands of people
Who have set themselves against me all around.

7 Arise, O Lord;
Save me, O my God!
For You have struck all my enemies on the cheekbone;
You have broken the teeth of the ungodly.
8 Salvation belongs to the Lord.
Your blessing is upon Your people. Selah NKJV


Then she got up from her chair and said, “I’m tired.  Good night I’m going to bed.”

It wasn’t until later that my dad told me how much that meant to him.  There had been some issues weighing on his heart, and he was feeling discouraged.  Those verses quoted so eloquently by my daughter were exactly what my dad needed to hear in that moment.  It was like God spoke prophetically through her.  It gave me goose bumps!  How exciting it was to me that God used Faith in this way.  I then stopped to really listen to the words of Psalm 3 and was so encouraged myself.  Daily it’s easier to dwell on the gripes and problems, but God is working in and through us!  May His Word encourage you today as much as it has us!